The Business Times' Column | Due Diligence: The future of fintech: From digital lenders to neobanks 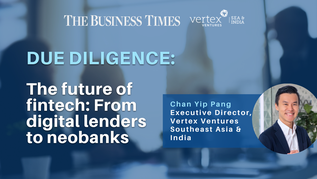 *This column was first published on *The Business Times

WHEN the pandemic lockdown started in Bangkok, Vin, who runs a small e-commerce store, needed cash to fuel his business growth. As an SME owner, Vin only had two choices – going to unlicensed money lenders that charged exorbitant interest, or risk missing out on business opportunities by applying for a bank loan which takes a while to approve with no guarantee that he can obtain the loan.

After a considerable amount of time spent researching his options, Vin chanced upon an app called SCB Abacus. To his surprise, he managed to obtain a productive loan within 20 minutes at an attractive interest rate. As a result, his business picked up and he has since continued borrowing to improve its working capital.

Such are innovations enabled by fintech to provide novel ways of supplying capital to underserved people like Vin. Fintech companies such as SCB Abacus (Thailand), Fairbanc (Indonesia) and Kissht (India) are examples of how fintechs are innovating and creating new business models addressing an overlooked segment of the population.

The potential for change and scale is immense – more than 70 per cent of South-east Asian consumers are still underbanked or unbanked today. In addition, millions of small and mid-size enterprises (SMEs), which form the economic backbone of the region, still face large funding gaps.

In Asia, digital lending is not new. However we believe South-east Asia and India are entering into the “Third Wave” of digital lending, where the advent and confluence of artificial intelligence, open finance and embedded finance are creating breakthroughs in credit assessment and customer outreach. The “First Wave” was the unregulated era where startups were testing business models, and the “Second Wave” marked the involvement of regulators to provide consumer protection, and productive loans startups began to emerge.

Contrary to popular perception, fintechs in this region are not necessarily disrupting the banks. Instead, they are filling a gap that is left by banks.

Evolution of credit reporting and the current state of financial services

For much of debt’s 5,000-year history, credit reporting had been an informal practice, largely anchored on personal relationships. For instance, store owners would ask well-regarded community members to vouch for the borrower’s character to lenders, or lenders only lent out money if they knew the borrowers personally.

Starting in the early 1800s in the United States and the United Kingdom, merchants began swapping information on customers who failed to pay their debts. These forums proliferated quickly and eventually became the credit bureaus we know today.

Further innovation took place in 1958 when Bill Fair and Earl Isaac created Credit Application Scoring Algorithms, their first credit scoring system which aimed to create a standard interpretation for various credit reports. This, which eventually became known as the Fico score, gained widespread adoption in the US when Freddie Mac and Fannie Mae started recommending it for mortgage applications.

Today, credit bureaus largely gather their data from banks, creditors and credit card companies and generate reports using Fico scores or equivalent methodologies. However with the majority of South-east Asia and India remaining underbanked or unbanked, they remain “credit invisible”.

Based on a study by IDC, South-east Asia’s credit report revenue per capita is at a meagre US$0.23, compared to US$9.50 in Singapore (the most mature in the region), US$13.30 in US, and US$18.70 in the UK. India is estimated to be comparable to South-east Asia.

Lack of access to formal financial services can have profound consequences. Being credit invisible, individuals and small businesses lack access to credit. Even if they manage to obtain credit, they are forced to pay exorbitantly high interest rates.

On the other hand, the lack of information makes it challenging for lenders to make informed decisions. Therefore, these customer segments are perceived as high risk and can only be offered financial products at higher rates, if at all.

Fortunately, governments and startups recognise this problem and are now making concerted efforts to improve the situation through digitisation.

Digital infrastructure built by governments serves as a strong foundation

Over the past decade, governments around Asia have been proactive in driving growth of the digital economy. One of the more profound efforts is the introduction of Aadhaar, a digital identification system in India. Aadhaar, which is linked to fingerprints and iris scans, provided a unique and reliable way to identify individuals while reducing identity theft significantly. This contributed to a significant increase in financial inclusion, driving account ownership up to 80 per cent of adults in 2017 from 35 per cent in 2011, according to the World Bank.

The introduction of UPI (Unified Payments Interface) in India in 2016 had a similar impact. It allows users to make payments without needing to download multiple apps. Similarly in South-east Asia, QRIS (Quick Response Code Indonesian Standard), DuitNow, PromptPay and PayNow were also introduced by governments to reduce payments friction.

Open finance refers to technology that allows data sharing (with customer consent) with just a few clicks of a button. Companies such as Perfios, Brankas, Brick and others enable financial services providers to obtain information about a consumer/business’s bank accounts, credit cards, loans, and investment accounts, as well as transaction data and other financial information. With AI, lenders can easily assess the risk of potential borrowers.

Embedded finance refers to the trend of non-financial firms increasingly offering financial products directly to their customers within their own apps and services. Today, fintech is increasingly becoming a core monetisation strategy for a vast majority of tech companies in the region. This could be microinsurance offered by ride-hailing apps, BNPL offered at e-commerce checkout, or even business loans through point-of-sales devices. Companies such as Nium, Pace, Turnkey Lender and Stripe are amongst key players that are providing the enabling backend technologies to empower non-financial firms to offer financial products and services.

Back to our example earlier, that is how Vin managed to get business loans from SCB Abacus within 20 minutes as he had been e-KYCed, risk-profiled through bank statements obtained through open finance infrastructure, and analysed through an AI-powered credit engine. Vin could also in turn, offer BNPL to existing customers at the e-commerce checkout page, which helps to improve the transaction conversion rate.

On the consumer side, we also observed the emergence of digital-first credit cards such as Slice (India), Honest Bank (Indonesia), and Yup (Indonesia) that provide credit lines to the mass affluent in both India and Indonesia, where credit card penetration has been below 5 per cent of the population.

Other large asset managers including Blackstone and Apollo have similarly made big pushes into private credit. According to Preqin, the market is expected to grow to US$2.3 trillion over the next five years. This trend will bode well for the fintechs in this region as availability of funds will help fuel the demand for credit that they see on the ground.

Where do we go from here?

At the end of the day, the access to financial services would benefit all the participants in the ecosystem. We believe that the startups that manage to scale, first starting from addressing a single pain point through a single product, will eventually broaden their services to be an all encompassing multi-product neobank covering five facets: spending, saving, investing, borrowing and protecting. The best fintech playbook has simply been to unbundle, grow fast and rebundle, in an effort to increase customer engagement and fulfill the monetisation potential.

Startups have strong advantages over incumbent banks on two fronts. First, those that have been able to consistently innovate and have a proprietary business model will have a better in-depth understanding of their client base’s consumption habits, thus enabling them to build better products with improved risk-adjusted pricing. Secondly, being digital native, they will have lower cost to serve per customer.

The question is, how do you keep the default risk at the minimum? What regulations should governments introduce to encourage growth but limit systematic risks? And for investors like us, which company will first find the path to help them scale exponentially? That’s the billion-dollar question.

**For the latest news on Vertex Ventures SE Asia and India and our portfolio companies, follow us on Linkedin or **subscribe to our monthly newsletter.