Understanding VC Podcast: Puiyan Leung on how we assess a founding team’s profile, what it takes to raise a series A & the opportunities in climate tech and creator economy 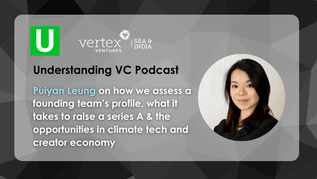 Understanding VC is a deep dive on how venture capitalists work. In this episode, Rahul Thayyalamkandy talks to Puiyan Leung, our Partner.

Tune in to hear about her journey of breaking into VC with her engineering background. She proceeds further by sharing her learnings and experiences that she’s had so far after working closely with startups followed by the processes and core values that we follow at Vertex Ventures.

She also talks about the ways we assess Series A startups based on the founding team and what it takes to raise a Series A. Eventually, the conversation shifts to ‘creator economy’ and ‘climate tech’, and Puiyan talks about the opportunities in these spaces, their sustainability, and the ways in which VCs look at them.

In this episode you will learn:

Listen to the podcast episode here: UVC: Puiyan Leung from Vertex Ventures SE Asia & India on how they assess a founding team’s profile, what it takes to raise a series A & the opportunities in climate tech and creator economy

**For the latest news on Vertex Ventures SE Asia and India and our portfolio companies, follow us on Linkedin or **subscribe to our monthly newsletter.